Our first cabin gets built! 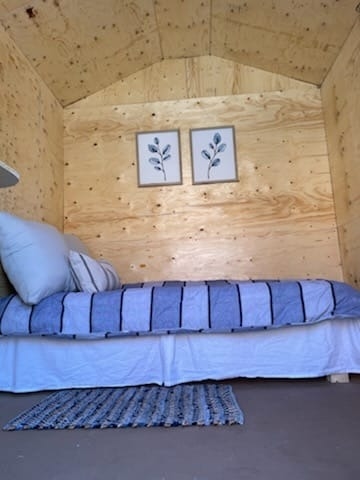 The demonstration cabin, donated by Stoney Creek shed builder In the Back Yard, showcases many of the features that the first 10 cabins will have once built: insulated walls and floor, a bed, a microwave and small fridge, a wall socket to charge a phone, a fire extinguisher.

“They will be safe and warm,” says HATS president, Julia Kollek. “There will be a bolt on the inside, a padlock on the outside and windows that are too small for anyone to climb through. It will be the resident’s own space, and only they will have a key.”

The cabin was speedily assembled on a sunny day in mid-March by Jason Scholes (co-owner of In the Back Yard), and Ray Gerow. The interior was finished by Grahame Meredith, owner of Hamilton-based handyman company Maintain Your Home, with help from his son Eddie, while the cabin bedding and decorative items was staged and donated by realtor Wendy Starr and her son Jay.

"I really choked up watching it being built,” Julia says. “Suddenly it was real. It was happening, after weeks of talking since last October.”

Julia had contacted In the Back Yard after finding a Global TV clip online about a homeowner who ordered a shed for a woman who was living on a mattress in the owner’s garden. In the Back Yard donated that cabin, too.

“All we want to do is help,” Jason says. “That’s what everybody should be doing. When we tell people we’re building cabins for a homeless community, their faces light up instantly.”

In the Back Yard has agreed to build the first 10 cabins at cost.

Nine communities in North America have some version of Hamilton’s tiny cabin initiative. HATS members are currently assembling best practices into a research report to guide their efforts.

Finding land for these projects is a universal challenge–and Hamilton’s experience to date is no exception. A potential site at the former Sir John A. Macdonald secondary school recently fell through. “It wasn’t the best spot from the perspective of those with lived experience of homelessness,” Julia admits. “There is drug activity downtown and people who want to rebuild their lives want to be away from that.”

“We’re looking for land in all the right places,” jokes HATS member, Deirdre Pike, who is also Justice and Outreach Program Consultant for the Anglican Diocese of Niagara and Senior Planner at the Social Planning and Research Council. “The best site is one where we can put the cabins up,” says Tony D’Amato Stortz, who was the former site manager and volunteer coordinator at Kitchener-Waterloo’s A Better Tent City and has been advising the Hamilton group.

Tony has conducted 37 in-depth interviews with people experiencing homelessness in Hamilton to learn what’s needed. All but one of the interviewees would be interested in a cabin, citing advantages such as privacy, a locked door, freedom, protection from rain and cold, and a small footprint to discourage clutter.

“You have that sense of a homey place. That makes you feel better. To maintain it, to respect it, to even possibly get clean,” one interviewee said. Another explained, “It’s a nice warm bed. My own little space–I can lock my belongings in it and don’t have to worry about someone walking by my bed and stealing it.” A third said, “You get seclusion and your own four walls. You never get that in shelter.” “It has everything a tent doesn’t,” said a fourth.

More than one hundred people attended the April 1st press conference to hear from HATS supporters, including Archdeacon David Anderson from Church of St John the Evangelist (fondly known as The Rock on Locke), former provincial Minister of Housing Ted McMeekin, and Don Seymour, the executive director of Wesley Urban Ministries.

A speaker who is currently experiencing homelessness used his first time in front of an audience to advocate for change. “Life is special and should be treated that way,” he said. “This tiny homes project could give people a sense of pride, especially if there’s jobs involved.”

Everyone who stood behind the microphone was clear about one thing: the tiny cabins are not a permanent solution. “We don’t want 100 cabins,” Deirdre told the crowd. “This is just a stepping stone–to get us through until 2025, when the provincial government has said it will eliminate homelessness.” ~ Report by Jen Dawson